Most notably, there is now a new type of card that can be used to “improve” the rest of cards in your hand. Basically, for the duration of the battle, those cards will become better versions of themselves. So a card that before granted +3T dice might now become a +100T card, for example.

The types of the cards will remain unchanged, but their numerical effects will increase. For cards with other conditions, such as specific rolls or delays, those conditions will also remain unchanged. Cards with costs might become more expensive, but their effects will also increase more drastically. Note that all these changes are battle-only. All your cards will return to normal once the battle ends.

To play around with this idea, I’ve also given the enemies two new possible types of arms that alter the cards in your hand. Again, any changes will disappear once the battle ends.

I’ve also added a bit of enemy variety in the way of three new enemy cores (bodies). They have effects that become more drastic the longer the battle goes on. As always, you can click/tap on them to see exactly what they do. 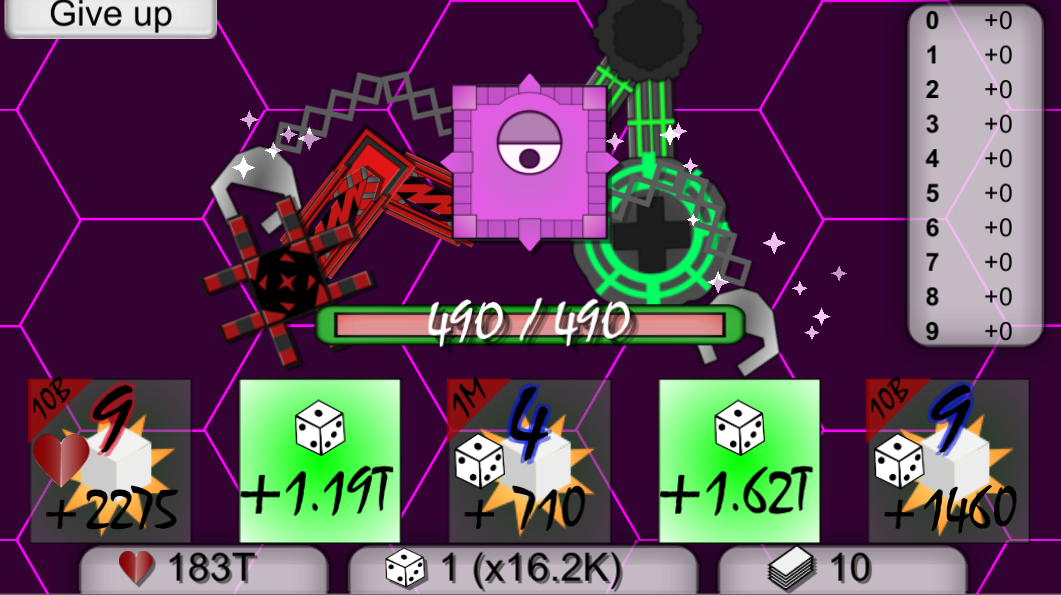 In last version (v1.1.4) I added special enemies with 6 to 8 arms that appeared every 20 ranks. I think this pace might actually be too slow and doesn’t scale well with difficulty, so I lowered the distance between those enemies. Now they will appear every 10 ranks instead.

And lastly, difficulty. It’s tricky to balance a game like this given the variety of possible decks and reroll strategies each player might follow, but in any case, I figure a common issue is that the player gets way too much EXP. Again, in last version I added silver and gold arms that grant extra EXP on defeat. That gets out of control too easily. So I tweaked some numbers to try to keep it in check.

Notably, the bonus EXP you get from rerolling has been lowered. Also, gold arms will now give +50% EXP instead of +100%. That was just silly, given an enemy can have multiple gold arms. For reference, an enemy with 4 gold arms used to give x16 EXP (!), while now it will give x5.06. Which is still a lot, but those enemies are rare so I’ll accept it.

And that’s about it. This will probably be the last significant update in a while, at least for now. So thanks and cheers.